Please take a moment to look over my links to the left concerning pro sports teams in Kentucky. The Bisons in Owensboro and the Stallions in Lexington are playing! The Stallions play their 1st home game ever this weekend. The new arena at the Horsepark should be an exciting venue to catch a game!

For hockey fans, I know that Evansville Indiana, not far from Owensboro, has started their season too, I really hope to catch a game or two this year!

I have mentioned that the arena football Horsemen in Lexington are done. I did hear some vague rumors about trying to get some sort of an arena football team going again in the area in the next year or so, that would be great.

I really hope that the people in these areas get out and support these teams. The players, coaches and owners are not getting rich with these teams. Most enjoy being a part of the games, and being a part of their community. The players are quality (check out the rosters for the basketball teams, former UK players are listed). Tickets are affordable and merch is cheap. The teams appreciate the support too!
Posted by jimerado at 12:31 PM No comments:

I try to check out local and independent acts at coffee shops whenever I can. I have seen some fun acts recently, but I feel compelled to write about these guys out of Ohio. This is by far the best band I have seen at a small venue. They rocked.

Lo-Watt Radio has a great sound from a talented four piece band. They reminded me of the polished recent line-up of Fairport Convention, if you have seen them recently. Fairport is one of my favorite live acts, but pound for pound, Lo-Watt Radio might be able to blow the more senior act off the stage. Lo-Watt radio has been together for less than a year, but they sound like they have been doing this for at least a decade. 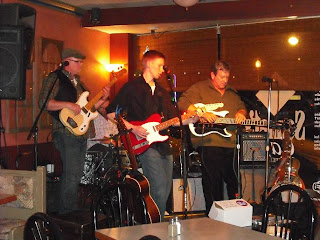 I love a solid sounding bass and drum combo. I have seen a lot of acts (stadium acts even) that sound flat in this area. Ron Cerosky's bass and Joel Eric Geiser on drums are flawless. They sound slow and smooth when needed, and they rock it up when appropriate. I could see this duo fitting in well with a mellow retro country act, or in a hard rock band. I can think of many major label acts that would upgrade with either of these guys in their lineup.

Doc Blankenhorn (banjo, mandolin, fiddle, dobro, lap steel, and backing vocals, according to their EP) and Michael Harvan (lead vocals, acoustic & electric guitars, harmonica, and keyboards) could each lead about any genre of band, and I bet they could do a heck of a solo show each.

Doc switched his instrument often. Watching him play his very unique steel guitar (Ron told me it was custom made for him) was worth the price of admission alone. Michael's joyful and energetic style of singing, playing guitar, and blowing on the harmonica reminded me of John Fogerty or Bob Weir.

These guys play a great set of mostly original tunes. They did throw in an amazing cover of Zevon's "Werewolves of London." I know, some songs have been played to death, and Werewolves might be considered one of those songs. This was no karaoke reading of the song though. It was true to the original but lost some of the bar room sing along feel other readings have. It was done with more passion and more heart. Lo-Watt did to Zevon's Werewolves what Hendrix did to Dylan's Watchtower.

I caught these guys at a small but packed coffee shop in the Akron Ohio area recently. They are developing a following, and if I lived in the area, I would be a part of it. They h 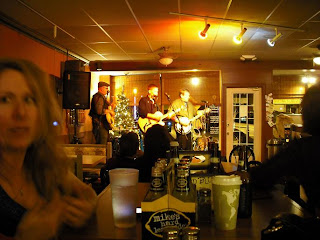 ave a great live sound and obviously enjoy what they are doing.

I talked to some of the guys after their 2 hours or so on stage. Ron and Joel said that they might try to get some Kentucky dates in, and maybe some southern Ohio shows. I sure hope to catch Lo-Watt Radio again soon. Check out their Myspace site:

Also, check out Sonnet's Coffee if you are near the Akron area. That's where I caught this act, and had some great coffee. The acoustics are perfect here too. This is the perfect coffee shop to catch a great indy act. 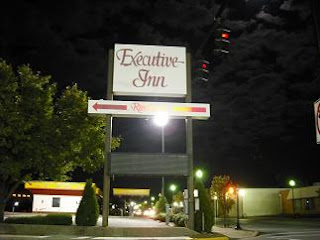 WOW! I have just caught up on reading about the destruction of this Owensboro landmark earlier this month.

I have my own personal memories of the place, mostly centered around catching classic rock acts in concert there. I saw Foreigner, 38 Special, Canned Heat, the Fabulous Thunderbirds, and others there. I recall one very novel show with "the Byrds" opening for Survivor. Actually, I believe it was one of the Byrds drummers with a bunch of young guys using the name. It was a fun show. I remember Foreigner, Kansas and the Fabulous Thunderbirds all sounding great at the Big E.

I remember my cousin working there, doing sound and light stuff for shows. He lurked around that place for a long time, becoming a bit of a fixture.

I remember going there when I was young. My family would eat at the restaurant there. The place seemed endless, with hallways full of rooms leading to more hallways. 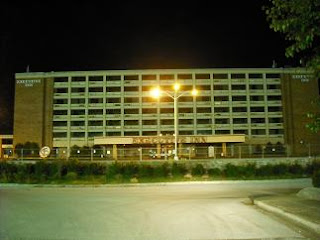 d it up. You heard rumors about what was to become of it.

I will try to get a few pictures I took up soon. My friend Karen Owen-Phelps has done a great job of covering the implosion. Check out her articles at the Evansville Courier & Press site:
http://btop.courierpress.com/staff/karen-owen-phelps/

Check out Karen's other articles too. There is a fun article about paranormal research groups in the area.
Posted by jimerado at 12:09 PM No comments:

For anyone that follows the Horsemen in Lexington, I have read that they have folded. I actually heard this several days ago, and just hoped it was a nasty rumor. I hoped that they might come back a few days later and announce that they were actually still functioning (like they did a couple of years ago, saying that they were no more, but then announcing a week or two later that they would actually be back in a new league).

Well, it looks like they could not swing the fees that the new Arena 1 League required. I am very sad to hear about this, they really put on a good show at Rupp, and I loved going to the games.

Their web site still appears current, though it hasn't been updated lately. I know the Lexington area will have a new pro basketball team and that's great, but I will really miss the Horsemen. I think they stuck around a lot longer than anyone expected.
Posted by jimerado at 2:07 PM No comments:

We covered a lot of ground on our trip to Maine. Sure, I know most people wouldn't drive out of their way for a coffee/ gelato place, but this place is worth driving out of your way for.


I must say that I am not a big gelato person. In fact, I have come across it rarely. Its like ice cream. Thats my knowledge of it.


The Gelato Fiasco has a unique way of making it, and people were loving it.

I must confess though, I went in for coffee. I had their "God of Thunder" coffee. Well, the coffee smelled great when I went to get it. This is one of those rare coffee shops where the coffee tastes just as good as it smells.


If you are ever near Brunswick or the Portland area, check this place out. It is on a nice street with other cool shops near by.


This might be hard to visualize, but they literally pour hot water directly into a free standing strainer with coffee in it. Your very own cup is placed under the filter, and it is brewed right into your cup. It was delicious!!


I sent an email to Josh at the Gelato Fiasco and asked him about how they make this great coffee. Here is how he explained it:


"We call it a 'Brew Bar'. It's basically a custom-made structure that holds four melita-like filter holders. The key is grinding the beans moments before brewing and using a correct grind with enough coffee beans. It's a little slower than an airport obviously, but the results speak for themselves. I'd say the only downside has been not being able to have coffee any other way or at any other place since we're the only ones I know of in Maine using this system".


I have been to hundreds of coffee shops. Seriously. I love good coffee. I can think of a couple of great places that make a distinct, perfect cup of coffee. This was easily one of the three best cups of coffee I have ever had. Ever.


If you are serious about good coffee and you are within an hour or so of Brunswick Maine make a point to get to this great place. If you are travelling with non-coffee people that's fine, they can have some gelato.
Posted by jimerado at 5:21 PM No comments: 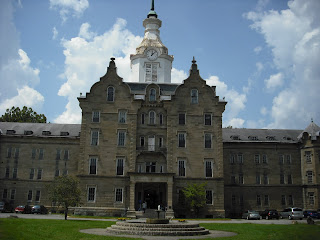 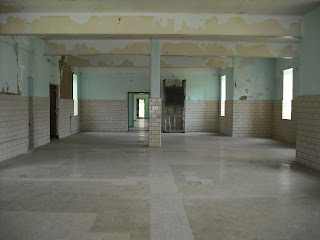 Yes, I know the name is not really politically correct, but that's what they call it. While operating, it was generally called Weston State Hospital.

This is an amazing place. I try not to write about facts that can be found on wikipedia, or on a locations homepage, so I will try to stick with the info our tour guide gave us. 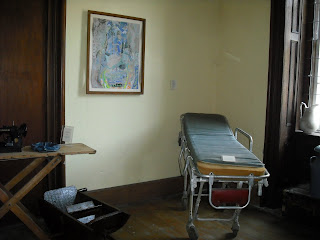 They started working on building this place BEFORE the Civil War! It was in use until 1994 as a mental health facility. Our guide, Kathy Turner, worked there from 1970 until 1994, when it closed.

There are two tours you can take. For $10 you get a tour of the entire first floor, and there is a $30 four floor tour. They have a late night ghost tour going on too, which is also fun, but I do like getting the actual historical info. 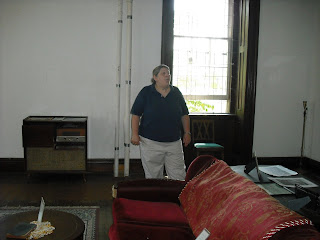 Kathy talked to us about the criteria for getting someone admitted, the number of patients housed there at different times, the role Weston played in the Civil War, and she did a great job of discussing some of the barbaric practices that mental health has utilized.

The architecture is stunning. The main building is huge. The history is endless. 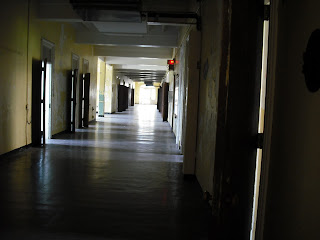 I did watch the Ghost Adventures Live show from there over Halloween weekend. That was a lot of fun. The site deserves that kind of attention and publicity. I was happy to see Dean Haglund hosting it.

This is a great place to visit for many reasons, and it is a day trip drive from the Eastern Kentucky area.
Posted by jimerado at 8:06 AM No comments: