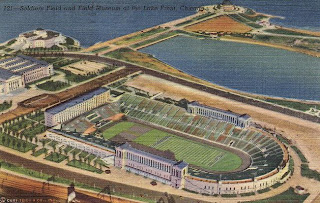 "Erected to the memory of Chicago's soldiers at a cost of $6,000,000. With a seating capacity of 150,000, it is the scene of great spectacles, pageants, music festivals, athletic events, and national gatherings."

This postcard was postmarked in 1947.
Posted by jimerado at 5:54 PM No comments: 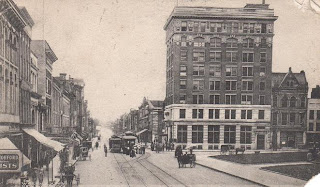 I REALLY love old postcards showing downtown Lexington! This one looks to be postmarked 1908! Check out the buggies and the street cars!

I recognize the big building on the right. The new farmers market sets up near it. I think most of the others are gone. I know a parking garage is on the left now too.
Posted by jimerado at 5:34 PM No comments: 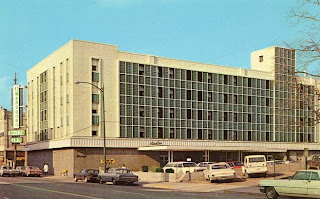 I have memories of seeing this building in Owensboro, but it is not there now. I can't remember when they took it down, but I am thinking it must have been some time ago.
Posted by jimerado at 5:15 PM 4 comments: 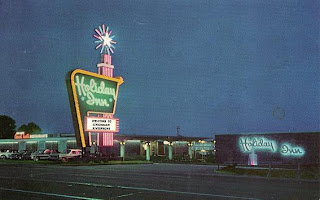 Holiday Inn in Covington.
Posted by jimerado at 10:50 AM No comments: 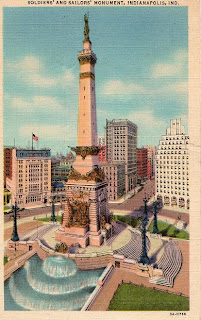 This is another great icon that I have several postcards of, but here is another new angle.

This card is postmarked 1944! The back description reads:

located in the heart of the city is recognized as one of the finest colossal sculptures in the United States. It is 284 feet tall and is dedicated to the Indiana heroes of past wars.
Posted by jimerado at 10:37 AM No comments:

I really love this postcard from way back! Check out the color, and the cars! 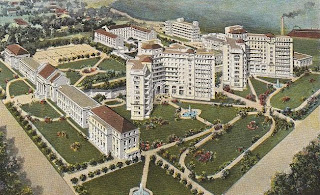 The sender of this postcard comments to the recipient that you can't tell how big the hospital really is from this view.

I actually used to visit this hospital professionally, and it still is big! There is much more to it now. The last time I was there, a parking garage was where the oval commons areas were. It has been some time, but a helicopter pad was added to or near one of the buildings. The far v-shaped building is a bit gothic looking if I remember correctly.
Posted by jimerado at 4:54 PM No comments:

Have you ever been to Uncle Lee's in Greenville? If you have, then you know that it is a little hard

to describe. It is unique.

I don't know how long it has been there, but I remember going there in the early and mid 90s. Then, it reminded me of a K-Mart with an emphasis on the needs of hunters.

So, they have a lot of the general things you might find at any store. They even have furniture in the back.

fact, I can't think of a bigger collection of stuffed animals. My dad loves this place.

Anyway, it is worth a bit of a drive off the beaten path to check out.

When I think of the western part of the state, I think about places like Uncle Lee's. 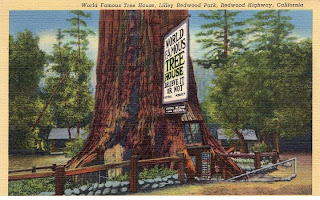 The back of this postcard, postmarked 1940, reads-

Featured by Robert Ripley as the Tallest One-Room House in the World, Diameter 33 feet. Circumference at base 101 feet. Ave over 4000 years. Hollowed by fire over 300 years ago, the tree is still vigorously growing. Believe it or not.

Anyone out there have more info on this tree? I can't find much information on it online.
Posted by jimerado at 6:16 AM No comments:

They have a cool hand made jewelry and other nic nac type store in the back. You will have to check that out on your own. It is hard to really describe the items they have. It is a great place to find a very unique gift for someone.

The shop has info on upcoming events too. Concert posters, gallery postcard, local free mags are easy to find here. Some other coffee shops have stopped allowing community info like this inside.

Oh, and the drinks are good!
Posted by jimerado at 5:01 AM No comments: 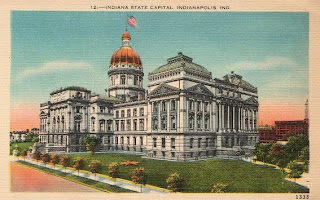 No description on the back, but it is postmarked November of 1945! What a good time to be in Indianapolis!
Posted by jimerado at 8:34 AM 3 comments:

It is cold here! Which means it is a great time to fantasize about summer trips!

Lately, I have been thinking about Pittsburgh. I spent time there during the 00s. I feel a real love for the town, and their sports teams. I was pulling for the Steelers at the Super Bowl, but I admire the other guys too. I like Aaron Rodgers a lot. He has a good attitude, and he can obviously keep it together during stressful times. I wanted the Steelers to win, but if a team had to beat them, I am glad it was the Packers.

Still, I had to buy my Packers fan friend Rick dinner the other night because of the game. Second year in a row I lost a dinner bet on the game.

I lost interest in the half time show. It made me think about how great recent acts like The Who, and Tom Petty were.

I was watching a playoff game in Pittsburgh earlier, and I saw Billy Gardell at the game. I immediately remembered having a conversation with Billy some years ago about Pittsburgh!

If you don't know who Billy Gardell is, you should. He is a great comedian that pops up in movies and shows all the time. Currently, he is the co-star of "Mike and Molly." By the way, I love that show.

I saw him do stand up several years ago and really enjoyed his set. In fact, I have probably watched over 200 comedians live at various times, and Billy is one of my all time favorites. He would easily make my top five list, and he might be at the very top of that one. Thea Vidale and Billy would be the two top ones.

I was wearing a Pirates shirt the night I saw Billy's act and after the show, I asked him for an autograph. He very kindly gave me one, and then we talked for some time about Pittsburgh, both agreeing that it is a great town that, at times, doesn't get the credit it deserves. It was nice talking to Billy about how great the area is.

Some people get their own shows, then act too good to be from an area. I like the fact that Billy takes pride in being from this great spot. He is an asset to Pittsburgh. 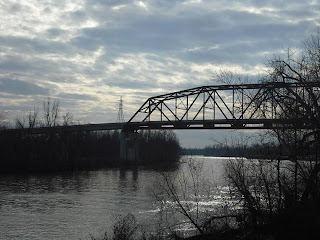 When I think of going somewhere just to get a burger, I think of Calhoun Kentucky. The little 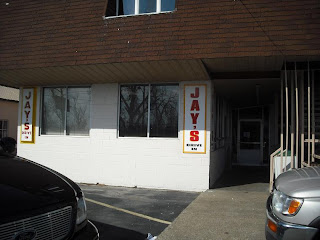 town is not far from Owensboro. I always thought of it as being between Owensboro and Greenville, but I never really mapped it out.

Calhoun is small. There is a grocery, a post office, and a few other businesses here and there. I remember, as a kid, my dad going to a business where you could "trade" a cow for some burgers in Calhoun!

Speaking of burgers, going to Jay's Drive In in Calhoun has always been fun. My dad and I had burgers, shakes and some fries for about $11 there recently. 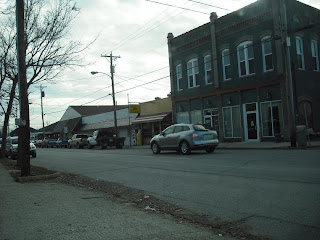 Calhoun is a scenic town. I wouldn't describe it as hopin' but it is pleasant. It is a small enough town that directions to Jay's are no problem. Drive to Calhoun, and drive towards Green River. You are there.

I do enjoy looking out at the river and the bridge. My dad swears he saw a fish the size of a car in this river once. In fact, he first thought it was a car that had gone into the river, until its tail flopped out of the water. 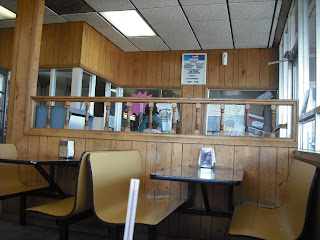 Posted by jimerado at 5:02 AM No comments: 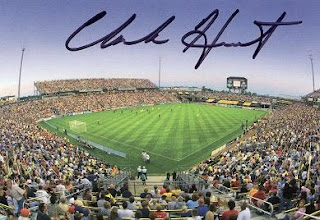 There are many areas that I absolutely love. Two of my favorites are Columbus Ohio and Kansas City Missouri.

I have spent a lot of time in Columbus. I have sung the praises of that town many times on this blog.

I visited KC this past year for the first time and immediately felt that the area was very under appreciated.

I sent a note to someone recently who has a strong connection to both of these great areas.

Clark Hunt is very involved with two of the major sports teams in each area. He is mostly known for his involvement with the Chiefs in Kansas City, but he also owns the soccer team, the Columbus Crew.

Mr. Hunt VERY kindly took a moment to send me a note commenting on his work in both areas.

"My family and I enjoy our ties to those cities, and it's great to watch our teams interact with the communities."

"To answer your questions, I am an avid fan of both football and soccer, and I enjoyed playing both sports when I was growing up. My favorite place to go in Kansas City is the New Arrowhead Stadium for Chiefs home games. There is nothing better than experiencing the pre-game tailgating, tasting the barbecue, seeing the sea of red in the stands and hearing the roar of the chanting fans- fans that have earned the reputation as the loudest in the NFL, I might add."

"In addition to Arrowhead, a great place to stop if you are planning a trip to Kansas City is Country Club Plaza. It's an outdoor mall located near downtown that is filled with many popular shops and restaurants. It's a very nice area to walk through while enjoying the fresh air and sites."

How cool is it that Clark Hunt took the time to send me a note? Obviously, he is very busy.

We are hoping to make it make to the area soon, and we LOVED Country Club Plaza on our trip last year!
Posted by jimerado at 5:32 PM No comments: 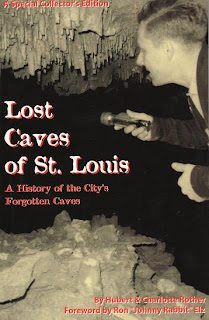 "Lost Caves of St. Louis" is a really fun book to read, even if you are not familiar with the city.

I love hearing about lost and forgotten places. I enjoy hearing the legends of places that were accessible at one time, but they are not now.

Of course, when I hear about a place that you could get to before, but you can't get there now, I want to go to it!

I think stopping to take a tour of a show cave is always exciting. I find myself in several a year and I enjoy each one.

It makes me a bit sad to know that the amazing city of St. Louis has the potential to add show caves to its extensive list of tourist attractions.

"Lost Caves of St. Louis" talks about the many caves in the area. It seems that most were originally used to store beer by the many breweries. The author and his wife get permission to explore most of the caves around the 60s.

Sadly, the openings to the caves have been destroyed for different reasons, and the entrances are no longer around!

I really would love to see St. Louis open up a couple again! It seems that roadways were the main cause of cave entrance destruction, but surely some access is still available.

I would love to hear from anyone with photos or more info on the caves.

This book is a fun one because of the great documentation of the caves by the author before they vanished. It is interesting hearing about the condition of the caves and how they were used at different times.
Posted by jimerado at 4:05 PM No comments: